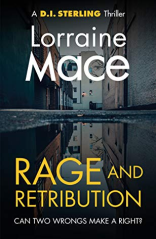 There is a lovely little moral dilemma running through the core of Rage and Retribution – the question of whether two wrongs make a right.

In the story, we soon learn that there is a person ‘Nemesis’ who is enacting revenge upon rapists, so far so good right… However, Nemesis has taken the act of retribution to its darkest edge and, much like in Retriever of Souls, Lorraine Mace leads us into some very uncomfortable, brutal and graphic scenes.

I’m a bit on the fence regarding my opinion of DI Paolo Sterling – most of the time I like him but there isn’t just something about him that rankles a little. Dave however seems like a top guy whereas the rest of the team seem 50/50.

There are some interesting little subplots throughout the story which add depth to the lead characters making them more real.

Overall a very interesting take on ‘can two wrongs make a right’ within a fast paced race to unearth the culprit.

My thanks to Lorraine Mace and Damp Pebbles for letting me be a part of this blog tour. 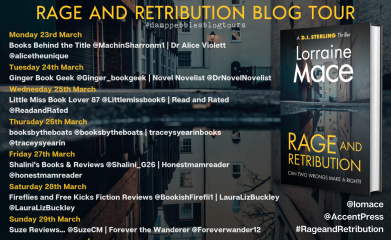 Blurb: Can two wrongs ever make a right?

A man is found by the side of a canal, comatose and brutally attacked.

It quickly becomes clear that someone is abducting men and subjecting them to horrific acts of torture. After three days they’re released, fighting for their lives and refusing to speak.

A councillor is accused of fraud.

Montague Mason is an upstanding member of the community. That is until he’s publicly accused of stealing the youth centre’s funds – an accusation that threatens to rip through the very heart of the community and expose his best-kept secret. But how far would he go to protect himself?

As the two cases collide, D.I. Paolo Sterling finds he has more questions than answers. And, when torture escalates to murder, he suddenly finds himself in a race against time to find the killer and put an end to the depravity – once and for all.