THIS IS SO GOOD! I genuinely can’t recommend A Litter of Bones highly enough, I was absolutely blown away by this debut novel and if I didn’t know better I would have sworn it was written by one of the crime thriller greats.

It is so good in fact that I can almost (almost) forgive JD Kirk for calling his main character DCI Logan. I say that because, for me, there is only one Scottish detective called Logan…

DCI Logan is a great character, he has the right balance of flaws and assets to make him a great lead and the supporting cast of his temporary team was equally well constructed.

Clever and innovative storyline, yes I guessed ‘whoduunit’ but that didn’t spoil anything for me – if anything it added to the build up. I raced through the book and loved (almost*) every second of it as the story unfolded. It was well observed, had tangible and likeable characters, had an intense build up of suspense and was peppered with intelligent humour in among the gloom – literally the perfect book?

*If you are a mad ole crazy cat lady then there are a couple of pages you may want to skip! 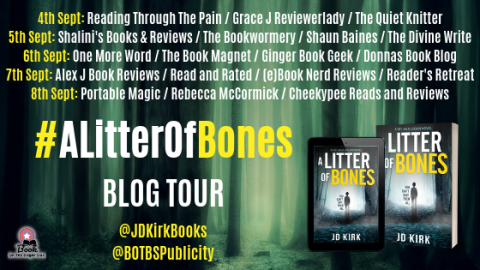 Author bio: JD Kirk lives in the wilds of Scotland, where he spends his days making stuff up and writing it down. He lives with his wife, two children, one dog, and – if his daughter has anything to do with it – a cat in the very near future.

Having been writing in various genres for over a decade, JD turned his attention to crime fiction in May 2019, and hasn’t looked back. A Litter of Bones is his first crime novel, and the first of his hundred-plus books that his wife could bring herself to read.

Synopsis: Was the biggest case of his career the worst mistake he ever made?

Ten years ago, DCI Jack Logan stopped the serial child-killer dubbed ‘Mister Whisper,’ earning himself a commendation, a drinking problem, and a broken marriage in the process.

Now, he spends his days working in Glasgow’s Major Incident Team, and his nights reliving the horrors of what he saw.

And what he did.

When another child disappears a hundred miles north in the Highlands, Jack is sent to lead the investigation and bring the boy home.

But as similarities between the two cases grow, could it be that Jack caught the wrong man all those years ago?

And, if so, is the real Mister Whisper about to claim his fourth victim?

A Litter of Bones is the explosive debut crime thriller novel from JD Kirk, an exciting new voice in Scottish crime fiction.