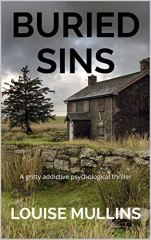 In a lot of ways, Buried Sins is a horrible story about horrible people who do horrible things, yet among the rubble of the depravity there sits a little girl called Carys who somehow manages to create a family and a life for herself.

On the cover, this is described as a ‘gritty, addictive, psychological thriller‘ and I would have to agree that is a pretty fair assessment, for Buried Sins is certainly addictive and I think a lot of this is to do with the clever way in which the story unfolds – it flits back and forth between childhood Carys and adult Carys and reveals layer by layer of truth along the way.

There is a lot of information regarding childhood abuse and some effects on of trauma on memory – this was very tightly woven into the story and did not feel gratuitous or out of place. As much as is possible, I felt this whole aspect of the book was dealt with sensitively.

I think what I found most disturbing about Buried Sins is the air of authenticity it has, especially when describing the family dynamic between Carys and her parents – both of whom seem as equally messed up as each other!

The miracle for me throughout this dark and disturbing tale is that Carys has managed to sustain a marriage and keep together a family of her own. In all honesty this stretched the realms of reality the most for me but then I remembered how much I enjoyed Harry Potter and Twilight and that this was also fiction and I shut up!

DI Locke and her team were background players for me and I wonder if we will learn more about them in future books; I hope so.

My thanks to Random Things Tours and to Louise Mullins for letting me take part in this blog tour. 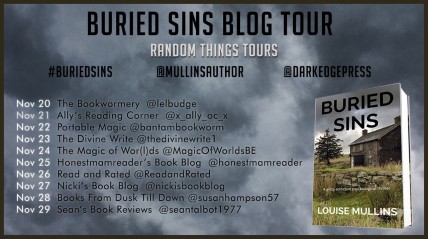 When Carys returns to her childhood home, inherited after the death of her father, she is shocked to discover the bones of an infant buried in the paddock. Days later, DI Locke’s team uncover the remains of a missing girl, sparking vivid memories of the day Carys was abducted by The Shadow Man.

While the evidence against her father mounts, Carys recalls more of her past. And each new revelation provides DI Locke with the proof she needs to close the cases of several girls’ disappearances.

Sometimes the past refuses to stay buried.