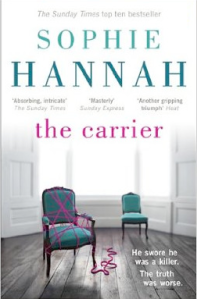 Synopsis: When her plane is delayed overnight, Gaby Struthers finds herself forced to share a hotel room with a stranger: a terrified young woman named Lauren Cookson – but why is she scared of Gaby in particular? Lauren won’t explain. Instead, she blurts out something about an innocent man going to prison for a murder he didn’t commit, and Gaby soon discovers that Lauren’s presence on her flight can’t be a coincidence. Because the murder victim is Francine Breary, the wife of the only man Gaby has ever truly loved. Tim Breary has confessed to killing his wife and even provided the police with evidence. The only thing he hasn’t given them is a motive: he claims to have no idea why he did it…

Another excellent book from Sophie Hannah.

I absolutely adore the way she writes the ‘human’ elements of her books. The passages of self contemplation and, often, self loathing undertaken by her characters really hits home. It’s incredibly easy to believe that these people are real.

How wonderful it would be to be as brilliant as Gaby; and yet those uber brain cells of hers seem to bring disappointment ever so easily to her door too.

I confessed to @SophieHannahCB1 that I quite loved both Tim and lead detective Simon Waterhouse and she was delighted! She has created two deep and wonderfully mysterious men, both romantic in non conventional ways.

Yes I’m still gutted that Waterhouse married Zailer and yes the whole Proust thing still niggles me, but none of that changes the fact that this is yet another very clever story line with well rounded and believable characters.

So then I confessed that I had an overwhelming urge to text the phone number mentioned within the story – in fact after a fair bit of egging on from other tweeters I did text it… ‘Hi Gaby x’ but sadly no one texted back. (Note to self, that could well be because you texted a fictional character!)

This is a very engaging book, the story line weaves over itself a little too much (in my view) in places but overall I thought it was really good even if there were times where I’m not quite sure that I kept up!

If you are thinking about reading this book, I would urge you to go back to the start and read Little Face then work your way through.