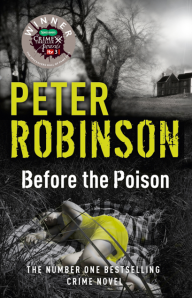 Synopsis: Through years of success in Hollywood composing music for Oscar-winning films, Chris Lowndes always imagined he would come full circle, home to Yorkshire with his beloved wife Laura.

Now he’s back in the Yorkshire Dales, but Laura is dead, and Chris needs to make a new life for himself. The isolated house he buys sight unseen should give him the space to come to terms with his grief and the quiet to allow him to work.
Kilnsgate House turns out to be rather more than he expected, however. A man died there, sixty years ago. His wife was convicted of murder. And something is pulling Chris deeper and deeper into the story of Grace Elizabeth Fox, who was hanged by the neck until she was dead . . .

This is a tale far removed from the normal style of Peter Robinson and other books of his genre.

Rather than being the fast paced, gritty page turner that you might expect, it is a far more sedate and, in places, quaint little story which flits between the past and the present as music composer Chris Lowndes finds himself unable to resist researching the history of the murderess who used to own his new home.

Personally, I wouldn’t have picked it up had I have realised what the actual story was, I’m a fan of fast moving crime thrillers and tend to avoid history based books like the plague! Having said that, however, I genuinely enjoyed this book and finding out more about Grace Elizabeth Fox and her alleged crime. The more gentle pace at which the story unfolds may not be for everyone but it still had a good mix of mystery and intrigue threaded through the pages.

The weakest part for me was the love interest for Christ Lowndes, I don’t think it added anything to the book.