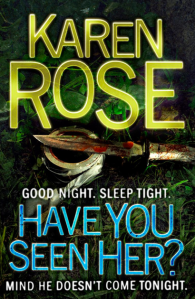 One by one, the girls disappear from their beds at night.  Each one is pretty, with long, dark hair.  And each one is found brutally murdered.

Special Agent Steven Thatcher has sworn to find the serial killer preying on this small town.  As the investigation pulls him one way, his family pulls him in another.  A widower haunted by loss, he now worries about his son Brad slipping away.  But there’s a bright light in his life; his son’s teacher, Jenna Marshall, has reached out to help.  She’s beautiful, kind, and considerate— and slowly, tentatively, she and Steven are starting to fall in love.  But both have been hurt before— badly. And as the two try to find the courage to bare their souls, a murderer who has slain many looks for the real treasure he craves.  He sets his traps.  And waits.  For Jenna….

I’m torn with this book as to whether I found it all a bit too saccharine sweet or whether I loved it!

I think I can overlook the soppy and overly twee love story on the basis that the two main characters were just really darn nice and I did find myself hoping they’d work things out and get together properly. (Whatever’s wrong with me, I’m going soft in my old age!)

I thought there were a few too many obvious clues that pointed out who the killer was from very early on and when the ‘twist’ came it was a little bit of a damp squib but I would imagine if this were ever to be made into a film it would work much better and have more impact.

Overall I genuinely did enjoy this although it loses a star for being just a little bit too predictable. Don’t let that put you off, still very much worth a read.