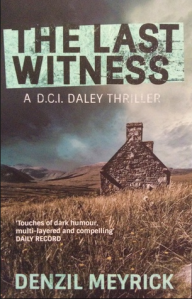 After enjoying Whisky From Small Glasses (sounds like a great hobby as well as a title for a gritty new Scottish crime thriller!), I quickly bought The Last Witness for my reading pile.

Jim Daley is now a DCI after a bit of a slap dash promotion during the first book and his character feels more comfortable, more rounded (in several ways) and more at home in his role and his environment. I really like Jim Daley, although I still picture him in my mind as Barnaby from Midsummer, albeit a sweary Barnaby!

The story itself is great, complex in places, simple in others with another layer of threads woven in which – much like in WFSG – clearly pave the way to be continued in a future book. I think this is a great touch and is missing from a lot of books which stick with beginning, middle and end – Denzil Meyrick manages to do all that and also include a ‘what if’.

I did get a weeny bit lost in one part of the story but I’m not sure if the muddle was my own head or if it wasn’t all that clear in the book. I very quickly got back on track though and whatever the reason for it, it didn’t detract from my enjoyment or understanding of the story.

My dislike of the promiscuity of one character is continued throughout this book, again a matter which in my opinion is treated bizarrely lightly given the potential consequences.

Overall a very welcome addition to the crime thriller market and I look forward to reading more by Denzil Meyrick; and I would imagine we’ll be seeing them televised too as the scenes are so easy to picture and would lend themselves incredibly well to a TV series.

Loving the cover artwork on this one too, it’s a far more professional look to the original cover on Whisky From Small Glasses which has the more homespun look of a self published novel.

Synopsis: James Machie was a man with a genius for violence, his criminal empire spreading beyond Glasgow into the UK and mainland Europe. Fortunately, James Machie is dead, assassinated in the back of a prison ambulance following his trial and conviction. But now, five years later, he is apparently back from the grave, set on avenging himself on those who brought him down. Top of his list is his previous associate, Frank MacDougall, who unbeknownst to D.C.I. Jim Daley, is living under protection on his lochside patch, the small Scottish town of Kinloch. Daley knows that, having been the key to Machie’s conviction, his old friend and colleague D.S. Scott is almost as big a target. And nothing, not even death, has ever stood in James Machie’s way…