Natural Causes is dark, brooding, grisly, intense, clever and immensely readable. I absolutely loved it and found myself frequently not wanting to put it down when I very much needed to (work and life do get in the way of a good book, don’t they!).

I’ve seen reviews for this where people have found the opening scene to be a bit too full on – just to say that this scene is now at the back of the book, to be read or not as the reader wishes. Needless to say I read it and it is pretty grim!

I really like Detective Inspector Tony McLean, he is a ‘proper’ detective; can’t rest until he’s absolutely got to the bottom of a case. Stuart MacBride is great too and a lot of the more central characters are strong enough to carry the role – the only relationship that didn’t work for me was the love interest but I guess that’s hard when you’ve created a stand alone, aloof, need-no-one guy.

I recently reviewed Dead Men’s Bones which is a later book in this series and I have to say I much, much preferred Natural Causes. Whether that is because the characters are more familiar to me now I’m not sure but for me this book is seriously good and I can’t wait to read the next one.

So, why did it lose that last half a star? One teensy thing that just took it all a step too far (not the money, not the fact he’s always right, not the many coincidences – I liked all of those); it was the last connection, the relative, that didn’t work for me. A bridge too far.

Small amusement… I’ve gone on to Good Reads to add my review and found this – loving the spelling of Edinburgh! 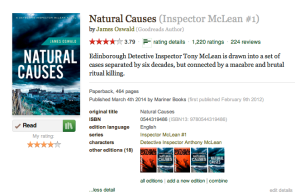 Synopsis: A young girl’s mutilated body is discovered in a sealed room. Her remains are carefully arranged, in what seems to have been a cruel and macabre ritual, which appears to have taken place over 60 years ago.

For newly appointed Edinburgh Detective Inspector Tony McLean this baffling cold case ought to be a low priority – but he is haunted by the young victim and her grisly death.

Meanwhile, the city is horrified by a series of bloody killings. Deaths for which there appears to be neither rhyme nor reason, and which leave Edinburgh’s police at a loss.

McLean is convinced that these deaths are somehow connected to the terrible ceremonial killing of the girl, all those years ago. It is an irrational, almost supernatural theory.