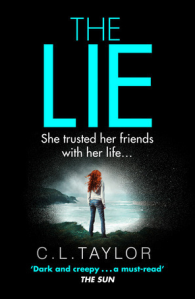 I enjoyed The Lie, it’s the first book that I’ve read for a while which doesn’t follow the classic crime thriller format and it made for a really refreshing change.

The book flits between present day and an event in the past. The two stories have a very different feel about them and it is interesting seeing other people’s opinions of ‘Jane’ in the parts of the books that involve her group of friends.

As well as being a psychological thriller that keeps you guessing all the way through, The Lie also does that horrible thing of scratching the surface on the dynamics of friendships.

Synopsis: I know your name’s not really Jane Hughes…

Jane Hughes has a loving partner, a job in an animal sanctuary and a tiny cottage in rural Wales. She’s happier than she’s ever been but her life is a lie. Jane Hughes does not really exist.

Five years earlier Jane and her then best friends went on holiday but what should have been the trip of a lifetime rapidly descended into a nightmare that claimed the lives of two of the women.

Jane has tried to put her past behind her but someone knows the truth about what happened. Someone who won’t stop until they’ve destroyed Jane and everything she loves.