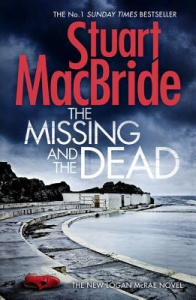 It was so good to catch up with Logan McRae again, it’s been too long! I wish this series would be snapped up for TV rights and it would make for great viewing.

Logan’s new role in the police isn’t filling him with joy but it does seem to be giving him a bit more stability… until Steel pops up again because she’s missing him. They make a great pair though.

The thing I love most about a Stuart MacBride novel is that although at time the subject matter may be silly, or gritty, or gross, the way the sentences are constructed is always intelligent. The words fly across the page because the flow is perfect; I never get bored, skim read or lose my place.

Logan’s ‘relationship’ with his poor girlfriend is both depressing and uplifting as although he is essentially tied to a ghost it also shows what a truly wonderful human being he is as he lives in virtual poverty in order to support her medical care.

Fabulous book (aren’t they all by Mr MacBride?), already looking forward to the next.

Synopsis: One mistake can cost you everything…

When you catch a twisted killer there should be a reward, right? What Acting Detective Inspector Logan McRae gets instead is a ‘development opportunity’ out in the depths of rural Aberdeenshire. Welcome to divisional policing – catching drug dealers, shop lifters, vandals and the odd escaped farm animal.

Then a little girl’s body washes up just outside the sleepy town of Banff, kicking off a massive manhunt. The Major Investigation Team is up from Aberdeen, wanting answers, and they don’t care who they trample over to get them.

Logan’s got enough on his plate keeping B Division together, but DCI Steel wants him back on her team. As his old colleagues stomp around the countryside, burning bridges, Logan gets dragged deeper and deeper into the investigation.

One thing’s clear: there are dangerous predators lurking in the wilds of Aberdeenshire, and not everyone’s going to get out of this alive…