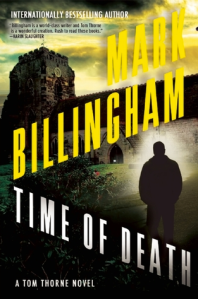 I picked up the latest Tom Thorne thriller with great delight as I’ve found his character to be an enjoyable one – all the way from Sleepyhead right up to date; this series is one not to be missed.

And now I can see there is a new Billingham book (non Thorne) that I haven’t read so I’m going to have to lay my hands on a copy of Die of Shame too!

Tom’s character is so flawed that he becomes believable. I like the fact that he can’t be arsed with most things and yet can’t ignore the nagging clues that most people wouldn’t spot in a million years. I can’t quite see why Helen is with him as he really isn’t the greatest catch in boyfriend terms but then I guess she probably isn’t winning any world’s best girlfriend awards either.

This story throws you in the middle of media shitstorm forcing you to view the case from the viewpoint of the girlfriend of the accused. It offers a horribly real feeling to the fact that the family of the person accused suffer and are persecuted just as much as the accused is. It’s not nice to face up to the fact that, as a Society, we do that.

I liked all the twists and turns and am happy to admit that I pegged the wrong guy.

Great book, I look forward to more and if you’ve never read this series then I urge you to go find a copy of Sleepyhead and I envy you your journey through the Thorne novels.

Synopsis: The astonishing thirteenth Tom Thorne novel is a story of kidnapping, the tabloid press, and a frightening case of mistaken identity. Tom Thorne is on holiday with his girlfriend DS Helen Weeks, when two girls are abducted in Helen’s home town. When a body is discovered and a man is arrested, Helen recognises the suspect’s wife as an old school-friend and returns home for the first time in twenty-five years to lend her support. As his partner faces up to a past she has tried desperately to forget and a media storm engulfs the town, Thorne becomes convinced that, despite overwhelming evidence of his guilt, the police have got the wrong man. There is still an extremely clever and killer on the loose and a missing girl who Thorne believes might still be alive.