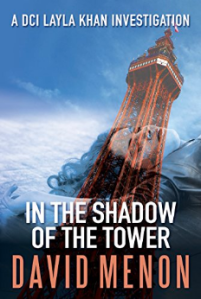 DCI Layla Khan is a woman who deserves to be in her post. She has climbed there, earned respect, suffered hardships and lost relationships; all of these things have shaped who she is today.

In the Shadow of the Tower is a great introduction to the character of Layla. She is clearly defined, has a strong sense of who she is and what she stands for and this resonates through the book.

David Menon doesn’t pull any punches (literally) with the main thread of this book, it was gritty and didn’t shy away from uncomfortable topics.

I enjoyed the storyline, it was imaginative and complex (possibly too layered?). DCI Khan is an interesting new addition to the crime thriller genre and I look forward to reading more about her in the future. Her sense of justice appealed to me. I felt the ‘battling of sexism and racism’ was slightly over egged, but I would imagine that to be more of a character defining, scene setting, introductory thing – all of which helped to shape the readers opinion of Layla. Would I want her on my side, yes. Would I want her as a boss, probably not!

All in all, I found the book engaging and I look forward to reading the next one!

Synopsis: ‘Lethal. Deadly. Dangerous. Fear and Loathing. Murder. This is what the streets of Britain’s premier holiday resort mean to Layla Khan. On the other side of where cheap booze, cheap clothes, slot machines and fast food reign supreme, Layla, who’s recently been promoted to DCI, has to try and sort out the Blackpool that all the tourists don’t see.

A teenage prostitute is found murdered. A sample of her blood was taken by the killer. Then a second one is discovered with the same MO. Why is the killer taking their blood? Both girls turn out to have been HIV positive. Did the killer know this? Were they deliberately targeted?

Taking on the investigation, DCI Layla Khan has to contend with a DI who displays thinly veiled racism towards her, and a superior officer who needs her to get a result quickly because he championed her promotion. A prominent local family at war with itself, corruption on the local council, plus a threatening hand from Layla’s past all make it difficult for her to get to a result.

But what will happen if she doesn’t?