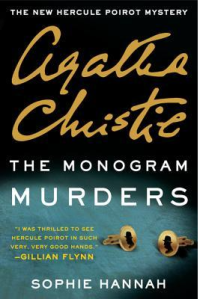 I’m going to start by saying that I am gutted for Sophie Hannah that this novel has such poor reviews on Amazon etc.

I can only assume the majority of the reviewers didn’t realise quite what they had in their hands.

I found The Monogram Murders to be every bit as comfortable as I had hoped. Yes, comfortable, like flicking through the TV channels on a Sunday and finding Midsumer Murders or Columbo and knowing that you are in for a few hours of gentle comforting entertainment.

I thought Hercule Poirot and his associates were beautifully captured and in my mind the homage to Agatha Christie was sensitively handled and I look forward to reading more in the new series.

Hercule Poirot’s quiet supper in a London coffeehouse is interrupted when a young woman confides to him that she is about to be murdered.  She is terrified – but begs Poirot not to find and punish her killer. Once she is dead, she insists, justice will have been done.

Later that night, Poirot learns that three guests at a fashionable London Hotel have been murdered, and a cufflink has been placed in each one’s mouth. Could there be a connection with the frightened woman? While Poirot struggles to put together the bizarre pieces of the puzzle, the murderer prepares another hotel bedroom for a fourth victim…

NEW YORK TIMES BESTSELLER
Since the publication of her first novel in 1920, more than two billion copies of Agatha Christie’s books have been sold around the globe. Now, for the first time ever, the guardians of her legacy have approved a brand new novel featuring Dame Agatha’s most beloved creation, Hercule Poirot.