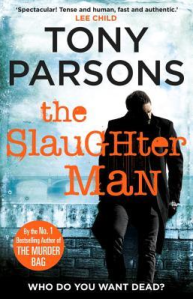 I really enjoyed this. I don’t know if there was less shmaltz than The Murder Bag or if I just didn’t notice it as much, but either way I thought this was a great read.

It does have a hulking great big clue in it quite early on, which I spotted but wasn’t sure where it was to be applied. You’ll have to see if you spot it too!

I thought the victim’s sister was a beautifully crafted character. She was clearly mesmerising to all and that shone through the pages.

Detective Wolfe seems to be one of life’s good guys, 100% focused on solving the crime while he is at work and also hellbent on being a good dad; what’s not to like.

Synopsis: A murdered family. A dying serial killer. A missing child. DC Max Wolfe hunts a pitiless killer through the streets of London. By the Sunday Times number one bestselling author of The Murder Bag.

On New Year’s Day, a wealthy family is found slaughtered inside their exclusive gated community in north London, their youngest child stolen away.

The murder weapon – a gun for stunning cattle before they are butchered – leads Detective Max Wolfe to a dusty corner of Scotland Yard’s Black Museum devoted to a killer who thirty years ago was known as the Slaughter Man.

But the Slaughter Man has done his time, and is now old and dying. Can he really be back in the game?

And was the murder of a happy family a mindless killing spree, a grotesque homage by a copycat killer – or a contract hit designed to frame a dying man?

Even the happiest of families have black, twisted secrets that someone is ready to kill for…