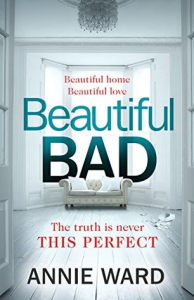 The opening pages, ominously entitled ‘The Day of the Killing‘ absolutely sucked me in and then I was then rudely wrenched from the bloodied crime scene and dumped back in the past as the book teasingly led me back to the present day. Whose blood was it? Who had died? Who did it?

Once I got over being dragged away from the edge of your seat, high alert scene of the crime the book settled into a reasonably chronological account of the events leading up to that frantic 999 call.

Maddie has lead quite the life as a travel writer and she and her best friend Jo (who is a ballsy lady who does whatever she pleases and to hell with the consequences) get into some dangerous situations. The whole part of the story when Maddie first meets Ian gives a fascinating insight into the difficulties faced by those trying to protect and deliver aid in worn torn areas.

I loved the bits with ‘Cami-toe’, and sensed that not everything Maddie shared with us could be relied upon entirely, there are a few clues and red herrings along the way and I have to confess I thought I had guessed the ending and ‘whodunnit’ but I wasn’t quite right…

‘Compelling. Filled with unexpected twists… a riveting read’
Sarah Pekkanen, author of The Wife Between Us

Maddie and Ian’s romance began when he was serving in the British Army and she was a travel writer visiting her best friend Jo in Europe. Now sixteen years later, married with a beautiful son, Charlie, they are living the perfect suburban life in Middle America.

But when an accident leaves Maddie badly scarred, she begins attending therapy, where she gradually reveals her fears about Ian’s PTSD; her concerns for the safety of their young son Charlie; and the couple’s tangled and tumultuous past with Jo.

From the Balkans to England, Iraq to Manhattan, and finally to an ordinary family home in Kansas, the years of love and fear, adventure and suspicion culminate in The Day of the Killing, when a frantic 911 call summons the police to the scene of shocking crime.

But what in this beautiful home has gone so terribly bad?