This is a stonking debut from Noelle Holten!

Focusing on a difficult subject – domestic abuse – without trivialising or sensationalising is a hard line and Holten walks it well. I really enjoyed Lucy’s character and found her a very engaging lead to follow. For me, DC Maggie Jamieson didn’t come across as clearly as Lucy which I hope will be put right in book 2.

Lucy’s imperfect relationship with Patrick was artfully described, a professional woman who ‘should have known better’ is portrayed here with complete honesty and shines a light on the complexity of domestic abuse / domestic violence situations.

I found the probation officer role to be a fascinating one and I hope Noelle will bring us more from her experience in future books.

Great debut – can’t wait to read more from this author.

Synopsis: When three domestic abuse offenders are found beaten to death, DC Maggie Jamieson knows she is facing her toughest case yet.

The police suspect that Probation Officer Lucy Sherwood – who is connected to all three victims – is hiding a dark secret. Then a fourth domestic abuser is brutally murdered. And he is Lucy’s husband.

Now the finger of suspicion points at Lucy and the police are running out of time. Can Maggie and her team solve the murders before another person dies? And is Lucy really a cold-blooded killer?

The opening pages, ominously entitled ‘The Day of the Killing‘ absolutely sucked me in and then I was then rudely wrenched from the bloodied crime scene and dumped back in the past as the book teasingly led me back to the present day. Whose blood was it? Who had died? Who did it?

Once I got over being dragged away from the edge of your seat, high alert scene of the crime the book settled into a reasonably chronological account of the events leading up to that frantic 999 call.

Maddie has lead quite the life as a travel writer and she and her best friend Jo (who is a ballsy lady who does whatever she pleases and to hell with the consequences) get into some dangerous situations. The whole part of the story when Maddie first meets Ian gives a fascinating insight into the difficulties faced by those trying to protect and deliver aid in worn torn areas.

I loved the bits with ‘Cami-toe’, and sensed that not everything Maddie shared with us could be relied upon entirely, there are a few clues and red herrings along the way and I have to confess I thought I had guessed the ending and ‘whodunnit’ but I wasn’t quite right…

‘Compelling. Filled with unexpected twists… a riveting read’
Sarah Pekkanen, author of The Wife Between Us

Maddie and Ian’s romance began when he was serving in the British Army and she was a travel writer visiting her best friend Jo in Europe. Now sixteen years later, married with a beautiful son, Charlie, they are living the perfect suburban life in Middle America.

But when an accident leaves Maddie badly scarred, she begins attending therapy, where she gradually reveals her fears about Ian’s PTSD; her concerns for the safety of their young son Charlie; and the couple’s tangled and tumultuous past with Jo.

From the Balkans to England, Iraq to Manhattan, and finally to an ordinary family home in Kansas, the years of love and fear, adventure and suspicion culminate in The Day of the Killing, when a frantic 911 call summons the police to the scene of shocking crime.

But what in this beautiful home has gone so terribly bad? 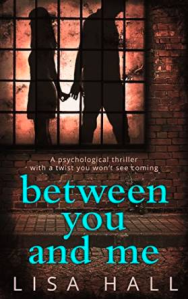 Such a clever book!

I will confess to discovering and reading this book purely because of the author’s name… but I’m so glad I did! I sat down with it one Friday bank holiday morning and I read and read and read and read. Several cups of tea and two coffees later I had read the whole darn thing!

Between You and Me tells you a story from two different perspectives, I found I very quickly had a ‘favourite’ out of these two and read the other person’s versions almost dismissively! Because the two different view points are both written in the first person I will admit that I found the first couple of chapters almost difficult to read. Not because of the story or because of the quality of writing, as they were both marvellous, it was more a case of my brain needing to re-train itself to read a certain way; which it did very quickly.

Later on in the book the reason for this is abundantly clear. The author will be gratified to know that I got to a certain point and then found myself thinking ‘oh god there are typos in here, she’s made a mistake’ and then page backwards through the story to see where it had gone wrong.

Of course, it hadn’t gone wrong and that is the beauty of this book. The subtle tricks that are played are quite brilliant; the glass of wine with the neighbour I think was probably the clincher for me, leading me cleverly down the wrong path.

As ever with this type of storyline, I do wonder how many people contact the author to discuss their own situation or to thank her for highlighting the issue. It is very sad that people live in such situations. If you are one of those people, here are some organisations that can help:

Synopsis: They say every marriage has its secrets.

But no one sees what happens behind closed doors.

And sometimes those doors should never be opened…

Sal and Charlie are married. They love each other. But they aren’t happy. Sal cannot leave, no matter what Charlie does – no matter how much it hurts.