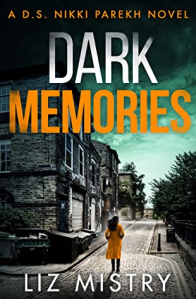 Although this is clearly an established series, Dark Memories is my first foray into the world of DS Nikki Parekh and her evidently traumatic past. I don’t feel that not having read the previous books hindered my enjoyment, although it would no doubt have  strengthened my connection to the characters.

Having survived an abusive childhood, Liz Mistry’s main character DS Nikki Parekh takes no grief from anyone and is stubborn and determined (a little to her detriment but I can understand why!) almost to the point of being pig-headed… She refuses to back down, at any cost.

Somehow she has retained strong family bonds and these are tested to the limit during Dark Memories as the past seems to be at the centre of the current case.

DC Sajid Malik is a great character, he has a softer edge to Nikki’s hardness and they make a good team.

This book in well plotted with a slow initial build but then it moves at a solid pace with the tension ramping up throughout.

When the body of a homeless woman is found under Bradford’s railway arches, DS Nikki Parekh and her trusty partner DC Sajid Malik are on the case.

With little evidence, it’s impossible to make a breakthrough, and when Nikki receives a newspaper clipping taunting her about her lack of progress in catching the killer, she wonders if she has a personal link to the case.

When another seemingly unrelated body is discovered, Nikki receives another note. Someone is clearly trying to send her clues… but who?

And then a third body is found.

This time on Nikki’s old street, opposite the house she used to live in as a child. And there’s another message… underneath the victim’s body.

With nothing but the notes to connect the murders, Nikki must revisit the traumatic events of her childhood to work out her connection to the investigation.

But some memories are best left forgotten, and it’s going to take all Nikki’s inner strength to catch the killer…

Before they strike again.