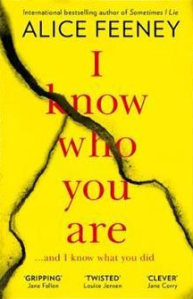 There’s a song by the Black Eyed Peas – Boom Boom Pow, and is what this book is BOOM, BOOM, POW!

I loved ‘I Know Who You Are’ and I devoured it in one day, I just had to keep reading and going back to it as I couldn’t for the life of me fathom how it was going to turn out.

I was hooked very early on and found both story strands to be equally compelling and brilliantly clever even though they each have a completely different pace and tone.

Alice Feeney has created hugely engaging story and I am thrilled to note this is her second book so there is another out there for me to read too. I’ve just spotted from her twitter bio that she’s had 10 years of rejections – wow, I guess there are some agents out there who are kicking themselves now!

Also, this book is SO devious, SO clever – you know you can sometimes win competitions to have ‘lunch with an author’ (I saw one earlier today in fact to win lunch with Lee Child – something I could never do as all I would end up doing is saying ‘Really? Really, Tom Cruise? Are you kidding me?’ which is probably rude) well suffice it to say if you end up going for lunch with Alice Feeney’s dark and ingenuitive mind it might make sense to let someone know where you are!

Synopsis: l Know Who You Are is the brilliant tale of two stories. One is about Aimee Sinclair—well-known actress on the verge of being full-on famous. If you saw her, you’d think you knew her. One day towards the near-end of her shoot on her latest film, Aimee comes home from filming to find her husband’s cell phone and wallet on the dining room table. He never goes anywhere without them. But he’s nowhere to be found. She’s not too concerned—they had a huge fight the night before. They both said things they didn’t mean. He might have done things he didn’t mean, things she can’t forget. Even though she has a history of supposedly forgetting. After all, she’s a very good actress.

The next morning she goes for her morning run and then goes to her favorite coffee shop. But her card is denied. When she calls the bank they say her account has been emptied of $10,000. She immediately suspects her husband. But they say no, it was Aimee herself who closed out the account. And thus begins a bizarre rabbit hole into which Aimee finds herself falling where nothing is at it seems.

Alternating with Aimee’s story is that of a little girl who wandered away from home. We always tell our kids not to talk to strangers or bad things will happen. Well, bad things happen.

In I Know Who You Are, Alice Feeney proves that she is a master at brilliantly complicated plots and twists after twists.