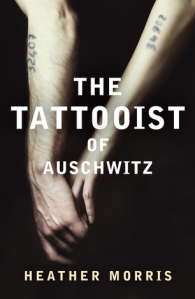 This is just one of those books that everyone should read. It is both humbling and beautiful, the prose is elegant and flows perfectly as you follow the story of Lale… a story that in other hands could be harrowing to the point of unreadable but Heather Morris achieves a wonderful balance of telling the story without glorying in the horror.

Lale – what a character, what a guy, the world needs more Lale’s. That this is a true account of a real man makes this all the more powerful and haunting. Lale, a Slovakian Jew, is by all accounts an incredible man who speaks many languages, has high intellect, lacks arrogance and can charm the birds from the trees. His brilliance and braveness shine throughout this book as his does pure compassion for all of his fellow (wo)men.

His love for Gita was really quite humbling, another man in his shoes may well have had his pick of the ladies throughout this tale and yet from one brief meeting his heart was set – this is was drives his passion to survive. His love for his mother and other older ladies throughout the tale was also quite charming and heartwarming.

The Tattooist of Auschwitz isn’t the type of book I would normally choose, I read it as part of a book group and I am so glad that I did – I know that it will stay with me for a very long time.

Synopsis: In April 1942, Lale Sokolov, a Slovakian Jew, is forcibly transported to the concentration camps at Auschwitz-Birkenau. When his captors discover that he speaks several languages, he is put to work as a Tätowierer (the German word for tattooist), tasked with permanently marking his fellow prisoners.

Imprisoned for more than two and a half years, Lale witnesses horrific atrocities and barbarism—but also incredible acts of bravery and compassion. Risking his own life, he uses his privileged position to exchange jewels and money from murdered Jews for food to keep his fellow prisoners alive.

One day in July 1942, Lale, prisoner 32407, comforts a trembling young woman waiting in line to have the number 34902 tattooed onto her arm. Her name is Gita, and in that first encounter, Lale vows to somehow survive the camp and marry her.

A vivid, harrowing, and ultimately hopeful re-creation of Lale Sokolov’s experiences as the man who tattooed the arms of thousands of prisoners with what would become one of the most potent symbols of the Holocaust, The Tattooist of Auschwitz is also a testament to the endurance of love and humanity under the darkest possible conditions.