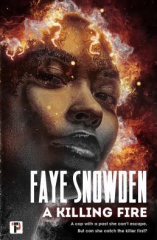 A very solid 4 stars for this epic tale. A Killing Fire is a slow burn (no pun intended) but slow as in melting molasses or as in a perfectly slow cooked chilli.

This book is atmospheric and reading it I could almost taste the dry dusty air and feel the sticky plastic in the diner when little Raven and her daddy went in for dinner. Deliciously descriptive.

The story itself is good and complex, Raven Burns is a truly tortured cop who suffered years of torment at the hands of her serial killer father – so much so that she still feels him and hears him every single day, as though her thoughts and emotions aren’t really her own.

As the plot thickens and the story unravels it becomes clear that Raven is entwined deeply within the tale – but how far did the apple fall from the tree…?

No spoilers from me! A Killing Fire is the perfect book for those who enjoy getting drawn into a story rather than reading a ‘wham bam thank you mam’ thriller.

My thanks to Random Things blog tours for letting me take part.

Synopsis: The first time Raven Burns saw her father kill, the victim was her mother. Afterwards, Floyd “FIRE” Burns set the house on fire, making Raven watch as the flames slithered across the yard like some unknowable language. Then he took her on a multi-state killing spree. She could’ve told or killed him in his sleep. But there were his constant whispers, his wet lips close to her ear saying that little girls who told were sent to hell, and their mothers were called down from heaven to take care of them.

By the time he is executed, Raven has become a cop with the sole purpose of putting men like him away. But she can’t escape Floyd’s terrorizing voice in her head, somehow guiding her steps while reminding her of the horrors he had forced her to witness. And she can’t escape the questions that continue to haunt her: Did witnessing make her complicit? Had the same evil that lived in her father taken residence in her soul?

The town of Byrd’s Landing, Louisiana appears to have made up its mind. The community accepts that Raven had nothing to do with Floyd’s crimes. But when Raven shoots a teenager who points what turns out to be an unloaded weapon at her, stories about Floyd resurface. The whispers begin. No voice is louder than wealthy socialite Hazel Westcott. When Westcott turns up dead in the backyard of her Big Bayou Lake estate, the doubting voices reach a deafening crescendo, and the ghosts of her past rise up to greet her. To catch Westcott’s killer, Raven must come to terms once and for all with who she is. And who she is not.