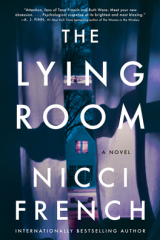 I found The Lying Room to be a highly engaging, fast paced read that I absolutely raced through as I just kept on wanting to know what happened next!

Central character, Neve, is one of those perfect people who everyone adores yet is utterly unassuming and apparently unaware of her magnetism. Friends, colleagues, even strangers are seemingly drawn to this calm, warm, efficient woman who busily spends her life making things right for others.

She treads carefully around the feelings of her husband and her daughter, she keeps a watchful eye on her sons and is the only person who ever notices that the guinea pig hasn’t been fed. She buoys up her colleagues at work and his the central pin of a decades long friendship group. She also does all the shopping, endless loads of laundry and cycles everywhere. She and her husband share most other domestic chores and their days and nights revolve around keeping all these plates spinning. So much so that she is susceptible to the attentions of a man who notices her – in a way that she hasn’t felt noticed by anyone for a very long time and they begin an affair.

As mentioned in the synopsis (full synopsis at the bottom of this page) one day she discovers that her lover has been murdered and rather than calling 999 she makes the snap decision to try and cover up any evidence that she was ever in his life.

I really liked the police character, DI Hutchings and felt thoroughly immersed in Neve’s world as I read this book. If you ignore the affairs, murders and deceit… it is a pretty enviable life.

Also, about the authors… I had no idea that Nicci French was actually two authors! Here are the details: Nicci Gerrard was born in June 1958 in Worcestershire. After graduating with a first class honours degree in English Literature from Oxford University, she began her first job, working with emotionally disturbed children in Sheffield. In that same year she married journalist Colin Hughes.

In the early eighties she taught English Literature in Sheffield, London and Los Angeles, but moved into publishing in 1985 with the launch of Women’s Review, a magazine for women on art, literature and female issues.

In 1987 Nicci had a son, Edgar, followed by a daughter, Anna, in 1988, but a year later her marriage to Colin Hughes broke down.

In 1989 she became acting literary editor at the New Statesman, before moving to the Observer, where she was deputy literary editor for five years, and then a feature writer and executive editor.

It was while she was at the New Statesman that she met Sean French.

Sean French was born in May 1959 in Bristol, to a British father and Swedish mother. He too studied English Literature at Oxford University at the same time as Nicci, also graduating with a first class degree, but their paths didn’t cross until 1990. In 1981 he won Vogue magazine’s Writing Talent Contest, and from 1981 to 1986 he was their theatre critic. During that time he also worked at the Sunday Times as deputy literary editor and television critic, and was the film critic for Marie Claire and deputy editor of New Society.

By the mid-nineties Sean had had two novels published, The Imaginary Monkey and The Dreamer of Dreams, as well as numerous non-fiction books, including biographies of Jane Fonda and Brigitte Bardot.

Nicci and Sean also continue to write separately. Nicci still works as a journalist for the Observer, covering high-profile trials including those of Fred and Rose West, and Ian Huntley and Maxine Carr. Novels include Things We Knew Were True (2003), Solace (2005) and The Moment You Were Gone (2007). Sean’s last novel is Start From Here (2004).

Synopsis: In this thrilling standalone from the internationally bestselling author of the Frieda Klein series, a married woman’s affair with her boss spirals into a dangerous game of chess with the police when she discovers he’s been murdered and she clears the crime scene of all evidence.

One little secret between a married woman, her lover, and a killer.

It should have been just a mid-life fling. A guilty indiscretion that Neve Connolly could have weathered. An escape from twenty years of routine marriage to her overworked husband, and from her increasingly distant children. But when Neve pays a morning-after visit to her lover, Saul, and finds him brutally murdered, their pied-à-terre still heady with her perfume, all the lies she has so painstakingly stitched together threaten to unravel.

After scrubbing clean every trace of her existence from Saul’s life—and death—Neve believes she can return to normal, shaken but intact. But she can’t get out of her head the one tormenting question: what was she forgetting?

An investigation into the slaying could provide the answer. It’s brought Detective Chief Inspector Alastair Hitching, and Neve’s worst fears, to her door. But with every new lie, every new misdirection to save herself, Neve descends further into the darkness of her betrayal—and into more danger than she ever imagined. Because Hitching isn’t the only one watching Neve. So is a determined killer who’s about to make the next terrifying move in a deadly affair….