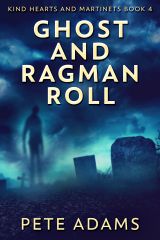 I’ve committed the worst of crimes and read this book without having read books 1-3 of the Kind Hearts and Martinets series, however I am relieved to say that it works really well on it’s own.

Being new to the series, I wasn’t entirely sure what to expect and was therefore surprised by the level of humour within the book as we follow main character DCI Jack Austin being virtually Clouseau-esque during his Paris escapades while he is meant to be off duty on his honeymoon.

This unusual take on a crime thriller with entertainment throughout from DCI Jack (Jane) Austin made for a dollop of light relief in my usual dank murder-filled to be read pile!

My thanks to Damp Pebbles blog tours for letting me take part.

Synopsis: Ghost and Ragman Roll is Book 4 in the bestselling Kind Hearts and Martinets crime series, featuring the eponymous Portsmouth detective DCI Jack (Jane) Austin. DCI Jack Austin is trying to enjoy his honeymoon with Detective Superintendent Amanda Bruce. But it soon becomes a busman’s holiday (or the crime busting equivalent) with news of a turf war in Portsmouth, a missing obese gangster who turns up skinny, and the seemingly unconnected murder of a banker in Paris. When an ambitious new detective arrives on Jack’s patch and starts making waves, he knows the time has come to get back to Southsea and protect not just his rather tarnished reputation, but those who truly matter to him. Ghost and Ragman Roll is another criminally funny romp with the world’s greatest – or is that worst? – police detective, DI Jack (Jane) Austin.