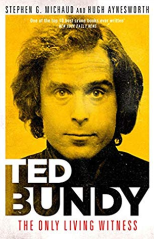 Wow, just wow. What a hugely interesting and insightful deep dive into the world of infamous serial killer, Ted Bundy.

I found this book to be truly fascinating. The first section is a horrible glimpse into his victims and the seemingly arbitrary method in which he chose them – or, in some cases, it seemed the virtually chose themselves.

Not a comfortable read that’s for sure – this section of the book had me sleeping with the landing light left on!

To read how close Bundy came to getting away with his crimes is really quite shocking. He was blatant, and acted seemingly with impunity when ‘picking up’ his – often initially willing – victims.

The little touches – like going out to get his hair cut and parting it on the other side when knowing he was to take his place in a police line up – are astonishing. As though he saw the whole thing almost as a game.

I would highly recommend this book to anyone interested in crime, true crime, profiling, psychology, criminology and law, it is absolutely captivating.

Blurb: ‘This is the most complete self-portrait ever painted by a serial killer… as unique a document as Bundy was a killer. There are lessons in this book for everyone’ ROY HAZELWOOD, FORMER FBI PROFILER

Two journalists with unprecedented direct access speak to Ted Bundy and those closest to him – friends and family.

What follows is a candid and chilling full account of the life and crimes of the most notorious serial killer in history.

What Bundy had to say in over 150 hours of face-to-face interviews is as relevant today as it was at the time.