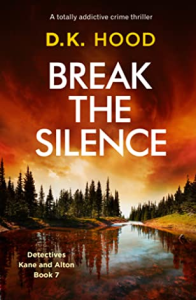 This is a fast paced, classic thriller which will keep you turning the pages late into the night on your quest to see the bad guy(s) caught.

I thought the descriptive intro and scene setting were excellent and hugely atmospheric. Chrissie was wonderfully described.

The relationship between the two main detectives was added a nice frisson rather then overshadowing the whole story, which I liked.

This is a really SOLID 4 stars – I have to be honest and say I dropped a star for a couple of reasons. One because it was super obvious to me who the killer was and two because I felt things got slightly (and I do mean slightly) muddled towards the end.

But that does not detract from the fact that this is a good solid thriller and I will definitely look out for more books by this author.

Blurb: Her head throbbed as she stumbles up the stairs. Music vibrating and the sound of partygoers fill her head as she walks into one of the dark, empty rooms. As she sits on the bed, she hears the unmistakable sound of the door locking behind her. She is not alone.

The body of college student Chrissie Lowe lies curled into a ball – long red cuts along her arms suggesting how she had met her death. Detective Jenna Alton is called in to investigate.

Purplish bruising on Chrissie’s upper arms make Jenna believe there is more to Chrissie’s death than others suspected, and she soon finds herself following the trail of the student’s last few moments, leading her to the scene of a party that had ended just hours before Chrissie’s body was found.

When Jenna hears reports that Chrissie was seen going into the bedroom of a college football star, she knows that finding out what went on behind that closed door could be the key to finding out how Chrissie ended up dead. But then another partygoer dies in an apparent accident at the campus gym just hours later, and Jenna is convinced the deaths are connected.

Facing a wall of silence from the student population, Jenna has to act fast to find the killer, but soon another student is found dead on the campus. As Jenna sends in one of her deputies undercover, she prays that she hasn’t just sealed his fate. Can she find the killer before any more lives are taken?