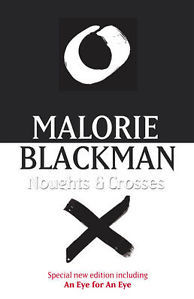 I’m still reeling from this book.

I am struggling slightly with what I have read and what it did to my mind. What a clever, clever take on racism and prejudice.

The story is about noughts and crosses (noughts being the pale skinned ‘blanks’ who still hold lower ranking second class roles and society and the crosses being darker skinned more influential and privileged) and the words ‘noughts’ and ‘crosses’ could so easily be interchanged with other words, cultures, religions, colours etc.

This book flips everything you know and makes you look at it from an alternate, independent, perspective and it shines an important light on the meaninglessness of discrimination.

Please don’t be thinking that it is preachy or educational – at it’s heart it is just a really good story.

Sephy and Callum, I felt so much for you both. I’m pretty sure that my heart broke a little at times.

I also went on and read an Eye for An Eye which was just as gripping and rounded the story off nicely. Well, I say nicely, it wasn’t nice but it certainly was an ending to this part of the story.

Blurb: Two young people are forced to make a stand in this thought-provoking look at racism and prejudice in an alternate society.

Sephy is a Cross – a member of the dark-skinned ruling class. Callum is a Nought – a “colourless” member of the underclass who were once slaves to the Crosses. The two have been friends since early childhood, but that’s as far as it can go. In their world, Noughts and Crosses simply don’t mix. Against a background of prejudice and distrust, intensely highlighted by violent terrorist activity, a romance builds between Sephy and Callum – a romance that is to lead both of them into terrible danger. Can they possibly find a way to be together?