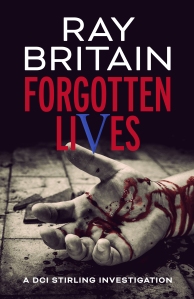 This is bit of toughie to review, first things first, it is a LONG book – if you like getting a lot of bang for your buck then boy is this the book for you!

It is the second in the DCI Stirling series and I haven’t read the first but I didn’t feel like I was particularly missing out so I would say this works just fine as a standalone. Of course, it makes sense to read book one first if you get an opportunity.

Stirling is a good character, a good strong male lead – having just watched the Pembrokeshire Murders on TV and hearing Stirling described repeatedly as strong and handsome, I imagined him looking like the lead actor, Luke Evans.

Scenes are well described and easy to imagine. There are many threads running throughtout the story that mostly all get tied off at the end. Mostly…

Here is where it gets tricky for me, I don’t usually like reading about James Bondesque womanisers but I did really like Stirling’s character, in spite of his tendency to have to fight off the ladies. Novak on the other hand… she is how men wish women behaved, rather than actually how women do behave – I found that all a bit unnecessary! But I know some will love it!

Moving swiftly on, the story is good and engaging, the lead characters are very well defined and despite the length of the book it doesn’t drag at all. It has a clever multi-agency approach rather than just a tight focus on one investigative team and this lends itself to an overall epic, movie style feel.

I can well see this ending up on the big screen.

Book Blurb: A man is murdered with quiet efficiency on his doorstep. A strange emblem left behind suggests a gang killing but when more bodies are found with the same emblem, and one of them a cop, DCI Doug Stirling’s investigation takes a sinister turn.

But what linked the victims in life, and now in death?

When more deaths are uncovered, miles away and years apart, but all with the same emblem left behind, pressure mounts on Stirling. Is it the work of the same person? If so, why are they killing again, and why here? One thing is clear. The killer is highly skilled, ruthless, and always one step ahead of the investigation. Is someone feeding information to them?

Working in a crippling heatwave with too few investigators, too many questions and not enough answers, when wild media speculation of a vigilante at work sparks copycat attacks, demonstrations for justice and with politicians fearing riots, Stirling needs a result – fast!

Meanwhile, Stirling’s private life is falling apart, not helped when Lena Novak of the National Crime Agency is assigned to his team. But is she all that she seems? Things could not get worse. Stirling takes a call from a retired cop. Things just got worse!

As Stirling closes in on the killer he finds the killer’s trademark inside his home – he is being targeted.