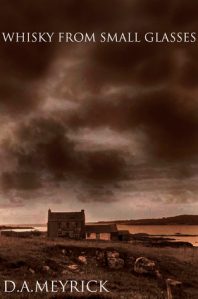 I set out to deliberately read a new author and stumbled upon Whisky From Small Glasses in my quest. I am so glad that I did! D A Meyrick has created a new series based around DI Jim Daley and his hapless sidekick Brian Scott, which breathes fresh breath into the bones of the gritty Scottish crime thrillers.

I found Jim Daley to be a likeable chap, although in my mind’s eye he kept appearing as the first Barnaby from Midsummer Murders (never warmed as much to the second Barnaby although I do have a soft spot for Sykes the dog) and I now can’t picture him any other way!

The only real negative I have about the book is the promiscuous wife, it just doesn’t work for me that he would have stayed married to her and be prepared to ignore her shenanigans. I’m wondering if this goes somewhere in latter books or was simply an error of judgement that will be swept under the carpet?

Either way, Whisky From Small Glasses is a great read with a refreshingly different storyline and I greatly look forward to reading the next book The Last Witness.

I can easily see this becoming a televised series, the beautiful Scottish landscapes, wildlife and squalid tenements will make for a great backdrop to DI Jim Daley as he battles his way through to solve crimes against the odds.

I will also confess to high fiving myself when I found the line ‘large men drinking whisky from small glasses’ within the book. Go me.

Synopsis:  DI Jim Daley is sent from the city to investigate a murder after the body of a woman is washed up on an idyllic beach on the West Coast of Scotland.

Far away from urban resources, he finds himself a stranger in a close knit community.

Love, betrayal, fear and death stalk the small community, as Daley investigates a case that becomes more deadly than he could possibly imagine; in this compelling, beautifully written novel- infused with intrigue and dark humour.