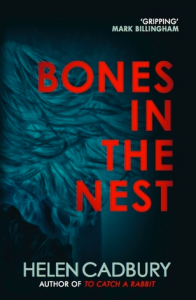 YES! I am so glad I went on to read book two after reading To Catch A Rabbit by Helen Cadbury and only awarding it 3 stars.

Bones In The Nest is a much more accomplished read. Sean Denton is a far more rounded and developed character and now that he is a PC he is much more convincing in his actions.

In fact there are so many clear, distinct and engaging characters in this book that it is hard to just pick out a few key favourites. Sean is obvious one, Khan too was a great character and I found myself drawn to the troubled Chloe. Just as strong but most unlikable were Sean’s dad and Terry – for me, the jury is STILL out on Lizzie!

The storyline was strong and good to follow, I wanted to know the answers and I wanted to keep reading to see how things panned out. At several points Sean seems to be getting himself into deep water and is then cleverly removed from it. The social aspects of the book are relevant and help to keep it fresh and edgy.

This has all the markings of being a brilliant new detective series and I will be watching with interest to see how it develops; I can’t wait for book three!

Synopsis: The second book in the Sean Denton series. A young woman is trying to rebuild her life after prison, but someone is out there who won’t let her forget what she’s done. Racial tension is bubbling up on the Chasebridge Estate and Sean is drawn back into a web of family and neighbours he’d rather avoid. When a body is found in the stairwell of a block of flats, Sean is right at the heart of the case.