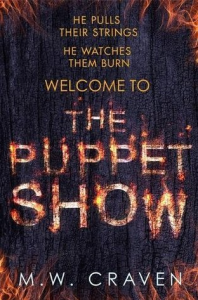 I had read and seen so many sparkling reviews for this book that I simply had to read it. All too often this is a path which leads to disappointment but The Puppet Show by M W Craven was a welcome exception.

The storyline, albeit gruesome and unpleasant, is strong which makes a solid base for some superb imagery and scene scene setting as we track a serial killer through the beautiful Lake District. I wasn’t sure what to make of Poe to start with but I really warmed to him (no pun intended) as the book progressed and Tilly was a delightful addition to this somewhat dark tale.

A thoroughly engaging and enjoyable read with a gentle humour running alongside the depravity of the story, I look forward to reading more by M W Craven and after I heard a whisper that Black Summer was appearing on netgalley and went straight there but seem to have missed it – another testimony to the excellence of The Puppet Show as it must have been snapped up within minutes!

Synopsis: A serial killer is burning people alive in the Lake District’s prehistoric stone circles. He leaves no clues and the police are helpless.

When his name is found carved into the charred remains of the third victim, disgraced detective Washington Poe is brought back from suspension and into an investigation he wants no part of.

Reluctantly partnered with the brilliant but socially awkward civilian analyst, Tilly Bradshaw, the mismatched pair uncover a trail that only he is meant to see. The elusive killer has a plan and for some reason Poe is part of it.

As the body count rises, Poe discovers he has far more invested in the case than he could have possibly imagined. And in a shocking finale that will shatter everything he’s ever believed about himself, Poe will learn that there are things far worse than being burned alive…