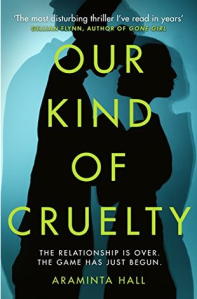 Is it wrong that I felt so sorry for Mike?

Frankly these two, Mike and Verity, are both as bad as each other and although Verity does appear to end up being ‘the victim’ she was most certainly the instigator for a massive amount of time and pretty much created the man that Mike became.

Their ‘Crave’ game was dangerous and depraved and yet it turned them both on… with Verity getting as much out of it as Mike which says so much about her and what makes her tick. Would she ever have been truly happy with a man like Angus?

I don’t want to give out any spoilers but let’s say the necklace surprised me and made me question the truth. Maybe (definitely I guess) Mike needs some psychological help but then again maybe Verity wants to have her cake and eat it by still pressing his buttons?

Although dark and disturbing this was a fabulous and compelling read, which left me with lots of unanswered questions, which I can well see being turned into a film – I will look out for more by Araminta Hall.

Synopsis: VERITY
Things were difficult with Mike by the end. He was too much, too controlling – sometimes, I was afraid of him. But I’ve moved on now. I’m getting married to the man of my dreams – he looks after me, but he doesn’t stifle me. Mike and the games we used to play – that’s all in the past now.

It’s time to move on.
Mike and I are finished.

MIKE
It was just a matter of time until she came back to me. After what I did, maybe she’s right to make me wait. But Verity knows how sorry I am. And the messages she sends me, the way she calls me, the way she acted last time I saw her – no-one acts like that if they’ve stopped caring.

She’ll be mine again.
No matter who stands in my way.