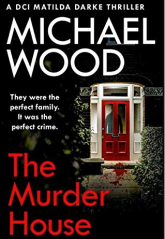 An easy 5 stars from me!

First things first, this is book 5 in the DCI Matilda Darke series so do yourself a favour and start with book one! Then book two… Then book three… Then book four…

The opening scenes are brutal and set the stage perfectly for the rest of the story. I was utterly gripped from the very first page of The Murder House and I fell straight back in with DCI Darke and her team as they raced to find the killer who has seeming butchered a ‘perfect’ family in cold blood.

Michael’s writing style is sublime and the way he captures the differing personalities of characters within the book is an absolute masterclass in the craft. All of the characters, from a prostitute who fills a few paragraphs, to the individual members of the team are well defined, individual and believable.

There appears to be a plethora of potential suspects, virtually everyone is lying about something and Matilda should know better by now than to take risks! There are some proper spooky scenes in The Murder House, plenty of peril and a nice number of red herrings to boot!

In among the horrors of the murder and the inevitable ‘whodunnit’ there are some wonderfully woven relationships, personal problems, office politics all running alongside the backdrop of Matilda and her life.

I long for this series to be televised; it is just perfect for it.

I absolutely adore the character Matilda and hugely look forward to new books in the series when they come out. I simply cannot recommend this series enough. If you have a book lover in your life this series would truly make the perfect Christmas gift!

Synopsis: It’s the most disturbing crime scene DCI Matilda Darke has ever seen…

The morning after a wedding reception at a beautiful suburban home in Sheffield, the bride’s entire family are stabbed to death – in a frenzied attack more violent than anything DCI Matilda Darke could have imagined.

Forensics point to a burglar on the run across the country. But cracks are starting to appear in Matilda’s team, someone is playing games with the evidence – and the killer might be closer to home than they thought…