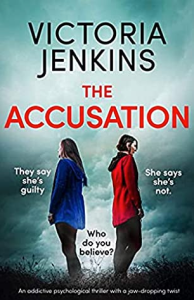 The Accusation begins with our lead character Jenna at the end of a night out and about to take a short cut across a park.

NEVER TAKE A SHORT CUT ACROSS THE PARK, OR DOWN THE ALLEY, OK?! N E V E R!

Right, sorry, where were we. Nothing good ever comes out of taking a shortcut through a dark and deserted part of town – my heart was racing at this point and I nearly put the book down!

Anyway, although she isn’t attacked some else is and Jenna run’s to help them. Basking in all her good samaritan glory, she later goes to visit the person in hospital only to have them scream the place down and accuse her of being the attacker.

The story then moves to whether people believe her (obviously the police, but also the people who KNOW her, the ones who should instinctively know she couldn’t/wouldn’t do something like this).

Definitely a good to be read at a pace to keep the momentum – and recommended to fans of psychological thrillers.

Blurb: They say she’s guilty. She says she’s not. Who do you believe?

‘Help me! Help me, please!’ When Jenna hears the cry in the park one night, she feels she has no choice but to run and help. Cradling the injured woman in her arms, the attacker nowhere to be seen, all Jenna wants is to keep her alive until the ambulance arrives and for the ordeal to be over.

But the nightmare begins when the victim wakes up…

Jenna’s relief turns to horror when the finger is pointed at her. There must be some mistake: she’s never seen the woman before in her life, and Jenna tried to save her life. Why would she accuse Jenna of a crime she didn’t commit?

As the case against Jenna grows, her world starts to fall apart. Her teenage daughter is keeping secrets and her husband is growing more distant every day. To save her family and clear her name, Jenna has to prove she didn’t do it. But someone knows something Jenna did do. And they want to make her pay…

The Accusation is an addictive psychological thriller that asks how far you would go for justice. Perfect for fans of He Said/She Said, The Silent Patient and The Woman in the Window.