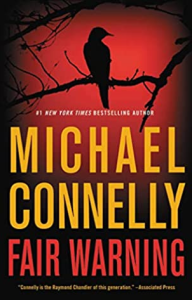 You just know that you are in safe hands picking up a Michael Connelly book!

Fair Warning is no exception and I loved reading about ‘Fair Warning’ so was delighted at the end to discover it is a real thing.

Jack McEvoy is a great character – he has a pigheaded and and relentless drive to find the truth. Albeit all too often at the expense of his future happiness.

I loved following this case, the book offered a reasonably in depth look into the risks of ‘fun’ DNA profiling and I have to say it would certainly make me think twice.

This felt like a long book (it’s hard to tell on Kindle!) but not in a bad way – more of a value for money kind of a way – it was a substantial read, maybe perfect for a lazing by the pool holiday!

I could easily see this making it onto Netflix (I haven’t checked, maybe it already is!) where I am currently watching – and loving – the Bosch series.

Blurb: The hero of The Poet and The Scarecrow is back in the new thriller from #1 New York Times bestselling author Michael Connelly. Jack McEvoy, the journalist who never backs down, tracks a serial killer who has been operating completely under the radar – until now.

Veteran reporter Jack McEvoy has taken down killers before, but when a woman he had a one-night stand with is murdered in a particularly brutal way, McEvoy realizes he might be facing a criminal mind unlike any he’s ever encountered.

McEvoy investigates – against the warnings of the police and his own editor – and makes a shocking discovery that connects the crime to other mysterious deaths across the country. But his inquiry hits a snag when he himself becomes a suspect.

As he races to clear his name, McEvoy’s findings point to a serial killer working under the radar of law enforcement for years, and using personal data shared by the victims themselves to select and hunt his targets.

Called “the Raymond Chandler of this generation” (Associated Press), Michael Connelly once again delivers an unputdownable thriller that reveals a predator operating from the darkest corners of human nature – and one man courageous and determined enough to stand in his way.