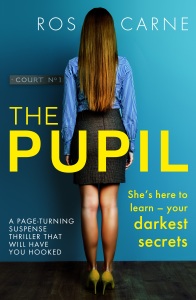 As a team leader, the absolute best thing you can do is build up the members of your team to the absolute best of their abilities – them succeeding you is the ultimate compliment. Right? But not if the way to pull you down on their way up.

Is it wrong to feel a bit sorry for Natasha? And to not particularly like Mel?

Mel’s son, Mel’s mum, Georgie – all likeable so that was something… not a complete dunking in a book of awful people!

Actually I did feel sorry for Mel but by golly she made some appalling decisions! You’d think a well practised, level-headed lawyer would know better.

Book Blurb: She wants to learn everything – about you.

Mel has practised law for twenty years. She is well-regarded by her peers. Her clients are happy. But behind the scenes her life is disordered. Her son grows increasingly distant from her. The married man she is sleeping with fails to give her what she needs.
When a trainee lawyer is allocated to Mel it is poor timing. The last thing she wants is a pupil watching her every move. And Natasha does watch. She sees each detail – and every mistake. Mel cannot shake the feeling that Natasha isn’t just learning the job. She is learning Mel.

Natasha is good at getting what she wants, and now Mel has the power to give her all she desires.

But when Mel chooses not to, Natasha knows just what Mel’s vulnerabilities are – and how to turn them against her. Mel’s secrets could ruin her. But who will be believed?