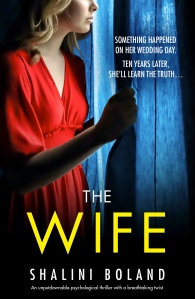 From the very beginning we are drawn into the world from Zoe’s point of view – a confusing start for her, and us, as she has just fainted and isn’t entirely sure what is going on.

As you follow the story, it becomes apparent that not everything as quite as perfect as it seems to be in Zoe’s life.

The story is broken up into ‘Then’ and ‘Now’ and I read it with a nagging feeling that something bad was going to happen!

As the 10th anniversary of their wedding approaches, people start acting oddly.

Toby, her husband, seems far too good to be true – but is he? Celia, seems to be the perfect mother-in-law – but is she? Her sister-in-law is one of her best friends – or is she? Her own sister has run away – or has she?

Still, she goes ahead with the planning and it felt to be as though a train was set in motion with poor Zoe hanging off the back of it not quite sure what was going on!

Overall, a superb psychological thriller that will keep you guessing and keep you up late into the night as you race to finish it!

My thanks to Shalini Boland and BOTBSPublicity for letting me be a part of this blog tour.

Blurb: Zoe fainted on her wedding day, and she never knew why. She’s always felt sure something bad happened. Ten years later, she’s going to find out what…

It was supposed to be the happiest day of her life. Zoe was sitting in her hotel room, in her perfect white dress, looking forward to the moment when she would make kind, handsome Toby her husband.

Then, there was a blank.

They said she must have fainted, overcome with emotion. But nothing felt quite right afterwards. Did something happen in that missing time?

Now, Toby and Zoe have two beautiful children and a perfect life. They’re planning their ten-year anniversary party for their family and friends. The invitations have been sent, the food ordered. They’re going back to the grand hotel where they got married.

But as the anniversary gets closer, it becomes clear not everyone is looking forward to celebrating. Zoe catches Toby lying about where he’s been. One of her best friends seems to be ignoring her. And someone is spreading stories that might stop the party from happening at all.

Zoe is increasingly sure that she doesn’t have the full story. But does she want to know the truth, if it will destroy everything?

From the million-copy bestselling author, this totally gripping psychological thriller will have you hooked from the first page to the last jaw-dropping twist. Perfect for fans of The Girl on the Train, Gone Girl and The Wife Between Us.

Author Bio: Shalini lives by the sea in Dorset, England with her husband, two children and their cheeky terrier cross. Before kids, she was signed to Universal Music Publishing as a singer/songwriter, but now she spends her days writing psychological thrillers (in between school runs and sorting endless baskets of laundry).