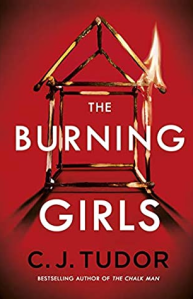 Super creepy and atmospheric, The Burning Girls hits all the right notes and I found I just wanted to keep reading. I felt so engaged in their lives, I still want to know more.

As much as I enjoyed The Chalk Man, The Burning Girls is a whole nother level – it is brilliant.

I thought Flo and Jack were great characters, I enjoyed their relationship together and both of the story threads when they were apart.

The whole ‘Harper’ storyline was sublime.

The burning girls themselves, *shudder* soooo scary! The little twig dolls on the door step and the missing knife – honestly Flo and Jack are so much braver than I am that’s for sure! I would have high tailed it out of there in no time.

I loved the small town mentality – I loved the creepy man, the the church, the vague sense of menace, the back story that ran alongside. Lots of twists and turns, lots of unlikable characters and lots of intrigue and mystery.

Honestly, I could wax lyrical forever about this book – I just completely loved it.

Blurb: 500 years ago: eight martyrs were burnt to death
30 years ago: two teenagers vanished without trace
Two months ago: the vicar committed suicide

For Rev Jack Brooks and teenage daughter Flo it’s supposed to be a fresh start. New job, new home. But, as Jack knows, the past isn’t easily forgotten.

And in a close-knit community where the residents seem as proud as they are haunted by Chapel Croft’s history, Jack must tread carefully. Ancient superstitions as well as a mistrust of outsiders will be hard to overcome.

Yet right away Jack has more frightening concerns.

Why is Flo plagued by visions of burning girls?
Who’s sending them sinister, threatening messages?
And why did no one mention that the last vicar killed himself?

Chapel Croft’s secrets lie deep and dark as the tomb. Jack wouldn’t touch them if not for Flo – anything to protect Flo.

But the past is catching up with Chapel Croft – and with Jack. For old ghosts with scores to settle will never rest…