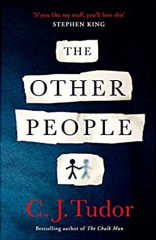 What an incredible storyline! Much like with The Taking of Annie Thorne CJ Tudor has created a surreal and captivating core within the story of The Other People.

The concept of ‘The Other People’ is both creepy and fascinating – I wonder if Tudor had fun researching the ins and outs of the dark web!

Poor Gabe really has led a life plagued with nightmare scenarios, he seems to have lurched from one awful situation to another.

Seeing his daughter in a car and then being told that she couldn’t have been there because she had died… what a way to mess with his mind!

This is a satisfying read which requires a little suspension of belief in reality but just go with it as the story is superb!

Three years ago, Gabe saw his daughter taken. In the back of a rusty old car, covered in bumper stickers. He was driving behind the car. He watched her disappear. But no one believes him. Most people believe that his daughter, and wife, are dead. For a while, people believed that Gabe was responsible.

Three years later and Gabe cannot give up hope. Even though he has given up everything else. His home, his job, his old life. He spends his days and nights travelling up and down the motorway, sleeping in his camper van in service stations, searching for the car that took her. Searching for his daughter.

Katie spends a lot of her life in service stations, working as a waitress. She often sees Gabriel, or ‘the thin man’ as she has nicknamed him. She knows his story. She feels for him, because Katie understands what it’s like to lose a loved one. Nine years ago, her father was murdered. It broke her family apart. She hasn’t seen her oldest sister since the day of the funeral; the day she did something terrible.

Fran and her daughter, Alice, put in a lot of miles on the motorway. Not searching. But running. Trying to keep one step ahead of the people that want to hurt them. Because Fran knows the truth. She knows what really happened to Gabe’s daughter. She knows who is responsible. And she knows that if they ever find them, they’re dead.

What a fabulous, creepy little book!

I was drawn in from the very first page and flew threw this book because I just didn’t want to put it down.

It was creepy, chilling in places, had a good build up of suspense, a few twists and turns and some really likeable characters. In fact, the attention to detail surrounding the characters and the effort taken to flesh them out is what made this book so brilliant for me.

If you have a book lover in your life, who enjoys a bit of unnerving escapism, this is probably the perfect Christmas gift!

Synopsis: When Joe Thorne was fifteen, his little sister, Annie, disappeared. At the time, Joe thought it was the worst thing in the world that could ever happen. And then she came back.

Now Joe has returned to the village where he grew up, to work as a teacher at the failing Arnhill Academy. Not an act of altruism, but desperation. Joe has bad debts – and bad people – he needs to escape. He also has an anonymous email: I know what happened to your sister. It’s happening again.

But coming back to the place he grew up, means facing the people he grew up with, and the things they did. Five friends: Joe, Stephen Hurst, Marie Gibson, Nick Fletcher and Chris Manning. They were the five who were there that night. Something they haven’t spoken about in 25 years.
Coming back means opening old wounds, and confronting old enemies and Joe is about to discover that places, like people, have secrets. The deeper you go, the darker they get.
And sometimes, you should never come back.