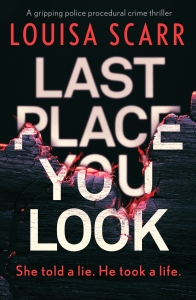 Oh my word, does no one keep it in their pants any more?

I guess not or there would be no more crime thrillers for me to devour!

DS Robin Butler and DC Freya West make for an interesting crime duo, both so utterly imperfect and deeply flawed. Should they be on this case? Questionable for one and doubtful for the other but this is, of course, what makes the story so interesting.

DC Freya West does her best to hold her emotions in check (and I am pretty sure she succeeds better than I would in her shoes) and DS Robin Butler fails to notice for far too long what is going on under his nose – largely because he is battling demons every second of every day – and also largely because that is just the sort of man he is.

The ‘victim’s wife is a cold and calculating piece of work and she most definitely has the upper hand throughout most of the book, and it is evident that she has the measure of DS Butler!

Overall a gripping and ultimately satisfying tale that is packed full of intrigue and unexpected turns, I really enjoyed reading this exciting debut and will definitely look out for other DS Robin Butler books. Blurb: When does a secret become a crime?

DS Robin Butler is accompanied by his new partner DC Freya West to notify the widow. He can’t understand why West behaves like a nervous rookie. He doesn’t know that the victim was West’s lover, and until that moment she had no idea he was dead.

West is devastated and confused. Jonathan’s wife hints that he was troubled, and West chooses to withhold her connection to him. If it came out it would end her career. Yet she cannot accept any version of events other than murder. His wife, she is sure, is lying.

As the pair investigate, Butler’s past and present also collide. When the truth is finally revealed, there is no mistaking who the guilty parties are. But can they trust each other with their darkest secrets? And how can justice be served when the laws that were broken go unnoticed?