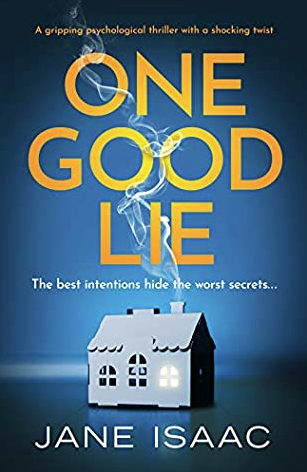 The relationship between the sisters was great – in fact the characterisation throughout was excellent. There are a couple of thoroughly unlikeable characters in One Good Lie and I love it when an author can make me dislike a fictional character!

I loved the determination from Ruby and know I would research the hell out of every angle if it were me so I could completely relate to her.

I found the book read at a fast pace and was hard to put down as I was so desperate to find out who the ‘real’ killer was.

One Good Lie has it all – a ‘whodunnit’ element, fractured relationships, red herrings and an air of mistrust. I am so glad that Jane Isaac turned her hand to the psychological thriller and hope this will be the first of  many.

Blurb: One little lie will be her downfall.

Ruby has always been the strong, older sister. Sophie has been the delicate one.

Ruby can’t help but worry for Sophie, who is wracked with guilt for introducing their mother to the man who would eventually murder her. And then the unthinkable happens. On the night of their mother’s wake, another woman is killed, a woman whose name they haven’t heard in a long time.

Ruby doesn’t want to suspect Sophie’s boyfriend, Ewan, of foul play. But she knows that Ewan was in the area the woman was killed around the time of her death – a fact that he desperately wants to hide. Ruby can’t help but wonder what else Ewan is hiding. But the more she digs, the more she wonders just how much danger her sister might be in…