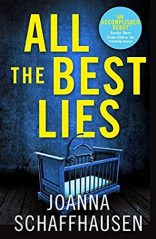 A gripping tale which follows FBI agent Reed Markham as he tries to delve deep into his own past to discover who murdered his mother – while he slept in a cot.

The story is rich and full of layers and depth – it crosses the timespan very well and with an authenticity.

Along with Reed is Ellery Hathaway who would appear to be someone who he rescued many years before – this back story is one I want to read more about and I will be backing a point of going back to book 1 to learn more! Their relationship develops during this book and it is clear that Reed has very genuine feelings for Ellery.

Reed’s family life is hugely privileged on one hand but also hugely complex on the other. His father is a certainly an interesting character and he fits the ‘all american bigshot’ brief well and truly!

Overall, this is a well put together whodunnit with interesting backstory.

Synopsis: FBI agent Reed Markham is haunted by one painful unsolved mystery: who murdered his mother? Camilla was brutally stabbed to death more than forty years ago while baby Reed lay in his crib mere steps away. The trail went so cold that the Las Vegas Police Department has given up hope of solving the case. But then a shattering family secret changes everything Reed knows about his origins, his murdered mother, and his powerful adoptive father, state senator Angus Markham. Now Reed has to wonder if his mother’s killer is uncomfortably close to home.

Unable to trust his family with the details of his personal investigation, Reed enlists his friend, suspended cop Ellery Hathaway, to join his quest in Vegas. Ellery has experience with both troubled families and diabolical murderers, having narrowly escaped from each of them. She’s eager to skip town, too, because her own father, who abandoned her years ago, is suddenly desperate to get back in contact. He also has a secret that could change her life forever, if Ellery will let him close enough to hear it.

Far from home and relying only on each other, Reed and Ellery discover young Camilla had snared the attention of dangerous men, any of whom might have wanted to shut her up for good. They start tracing his twisted family history, knowing the path leads back to a vicious killer—one who has been hiding in plain sight for forty years and isn’t about to give up now. 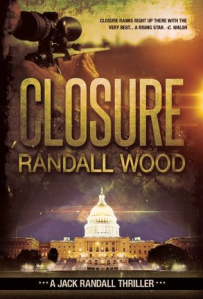 I have to start by saying that that the cover of this book looks really ‘blokey’ I would never have picked it up if I’d seen it on a shelf. However as I bought it through the kindle store I just went by the name and description and I’m glad that for once I wasn’t able to judge a book by its cover.

Closure was really good and definitely not just a mans book, it had a standard FBI thriller feel about it with the added interest of following a sniper with a cause. Anyone who is a fan of thrillers and ‘whodunnits’ should enjoy this book.

I enjoyed the characters and their varying relationships with each other, although I though Jack’s wife got short shrift almost as if she was a token character ready to be written out in the future maybe.

I’ll definitely be keeping an eye out for Randall Wood’s other books.

Synopsis: When a prominent lawyer is shot while waiting at a suburban stop sign it sets off a nation-wide manhunt for an elusive killer. Special Agent Jack Randall of the FBI finds himself appointed to track down and stop the shooter. Not by his superiors, but by the killer himself.

As more bodies fall the shooter takes his message to the press, earning the support of the public with his choice of targets and confounding the FBI at every turn. From the desert of Nevada to the urban jungle of New York City, Jack and his team follow the trail of bodies and haunting messages left behind by the killer. With the pressure to find him mounting on Jack, the assassin’s crimes grow bolder, and his message more sinister and closer to home.

It becomes clear to Jack that in order to find the shooter, he may have to look inside his own past, and become the man he was years ago. 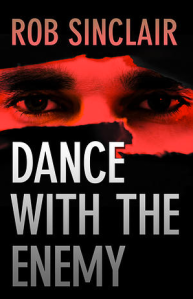 I feel a bit mean not giving this 4 stars but I’m going to stick to my guns because although Dance With The Enemy was good, I think it could have been better and I’m sure that Rob Sinclair‘s next book WILL be better.

I loved the Carl Logan character, I thought he perfectly fitted the bill of an off the grid, Jack Reacher style agent. I liked his boss and their relationship and I liked Carl Logan’s utter disregard for rules and niceties.

I thought the overall storyline was great, Selim was damn scary and torture scenes were appropriately gritty and awful. Although I have to admit I did feel that the ending was a little weak compared to the body of the story.

I thought I liked Grainger until said ending, not because I disagreed with her actions but because the ending didn’t fit the character up until that point – in my opinion – I don’t want to give the storyline away so won’t say any more on that.

So for me it was very nearly great, I definitely enjoyed reading it and I would look forward to reading other books by Rob Sinclair as I think he will improve and hone his technique in future books and I can see that would make them outstanding.

Synopsis: Carl Logan was the perfect agent. A loner. No real friends or family. Trained to deal with any situation with cold efficiency, devoid of emotion.

But Logan isn’t the man he used to be, or the asset he once was. Five months ago his life changed forever when he was captured, tortured and left for dead by Youssef Selim, one of the world’s most violent terrorists.

When Selim mysteriously reappears in Paris, linked to the kidnapping of America’s Attorney General, Logan smells his chance for revenge.

Pursuing his man relentlessly, oblivious to the growing trail of destruction that he leaves in his wake, Logan delves increasingly deep into the web of lies and deceit surrounding the kidnapping.

Finally, he comes to learn just what it means to Dance with the Enemy. 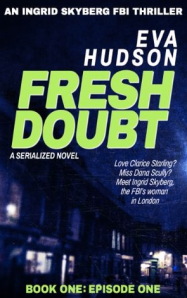 I’ve sought out another debut to read and review: Fresh Doubt is the first  novel in the FBI Agent Ingrid Skyberg series by Eva Hudson.

Overall this book was a really good read although there were a few things that didn’t quite gel throughout but the mix of an FBI agent in the UK added a certain something to the story that set it aside from the usual police crime thrillers.

The storyline itself was good, interesting to follow and with a nice amount of red herrings thrown in along the way to keep you guessing. Also, there were several strands that ran throughout the book alongside the main murder enquiry which made the story more interesting and hopefully set the scene for them to be continued in book 2. I did guess ‘who dunnit’ but then, I’m a smart arse 😉

Main hero of the piece FBI special agent Ingrid Skyberg took a bit too much of a kicking for my own personal taste and I felt it lent her an air of almost terminator style endurance that was just a weeny bit too far out there, for me.

Ignoring that, she was a good strong female lead and I think with a little polishing and settling in, she could be an excellent character to follow and I look forward to reading the next book in the series from Eva Hudson.

Synopsis: A story of lies, secrets and deadly mind games. Brilliant American psychology student Madison Faber is in police custody – a potential murder suspect. Two hours ago she found her roommate lying in a pool of blood.

Special Agent Ingrid Skyberg is assigned to investigate the case on behalf of the US embassy. Tasked with supporting a terrified Madison Faber and uncovering the truth behind her friend’s death, Ingrid quickly discovers a sinister extremist group operating out of Faber’s London college.

Up against the obstructive attitude of the Metropolitan Police and defying the wishes of the embassy, Ingrid must navigate through a minefield of fear and mistrust to discover the killer’s true identity. But in order to ensure justice is served, she is forced to operate so far beyond the law that she may never get back again.