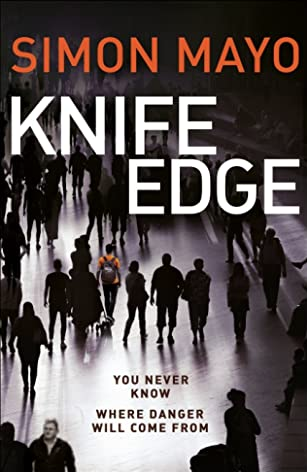 I don’t know why but if feels slightly surreal to be reviewing a thriller novel by Simon Mayo – him off the radio – and yet not only am a reviewing a book written by the dry humoured radio DJ, but by god it was good!

It’s still weird, I can hear his radio jingle on a loop every time I think of his name, anyway, where was I…

Knife Edge had me hooked from the very first line, it has an incredibly strong start and I was utterly invested within the first few pages. Having read the blurb I was a little concerned at how well the story could reflect this type of attack but I needed have worried, Mayo made the story alive and every single word felt urgent and true.

My only downer is that I didn’t find Famie all that easy to connect with as a character, I wish I could have found her more engaging – then I think this book would have sung. Having said that, I would make for a breathtaking film.

All in all, I highly recommend this fast paced, tense, uber exciting and all too relatable thriller. Nice work Mr Mayo!

Blurb: 6.27am. The sky is blue. The air is warm with a summer breeze. And in the last 27 minutes, seven people have been murdered.

In a series of coordinated attacks, seven men and women across London have been targeted. For journalist Famie Madden, the horror unfolds as she arrives for the morning shift.

The victims have one thing in common: they made up the investigations team at the news wire service where Famie works. The thought in everyone’s minds, what were they working on that could prompt such brutal devastation? And as Famie starts to receive mysterious messages, she has to find out whether she is being warned of the next attack, or being told that she will be the next victim…

In this gripping, fast-paced thriller that could have been ripped from tomorrow’s headlines, Simon Mayo has written an electrifying novel about the dangerous world we live in.